GP Photos - This CD contains over one hundred GP and MotoGP photos from 2000-2005. Featured are GPs from Spain and Portugal and MotoGPs from Spain and the United States including the 2005 Grand Prix at Laguna Seca - the first motorcycle grand prix in America since 1994. GP's final year, 2001, is well represented including the first post-9/11 and the last European motorcycle grand prix, the Comunitat de Valencia (Spain), where Kenny Roberts, Jr clinched his only world championship and a moment of silence was held for the victims of America's deadliest terrorist attack. The most moving display was by premier class winner Sete Gibernau who, after his victory lap, grabbed an American flag, knelt in the grassy infield, and prayed.
The strange and wonderful cosmopolitan country of Portugal is documented with shots from the 2001 GP at Estoril, but the strangest grand prix of all is the US Grand Prix where over 100,000 fans, support crew, and racers are crammed into a canyon formed by a few California hillsides accessible only by the long, narrow, barely one-and-a-half lane roads of an old Army base. It's a shock to the small elite group of usually sequestered MotoGP pilots when they see an armada of enthusiasts freely walking among the the team transporters, sponsors' hospitality tents, and the racers' RVs, but that's what makes Laguna Seca special.
Have your own close up static and race action photos of Rossi, Hayden, Biaggi, Roberts, Gibernau, Pedrosa, and many more. These shots are obtainable only if you have a coveted photograper's media accreditation (Hot Pass). Catch the infield and paddock action and see for yourself if California girls can hold their own against European beauties. 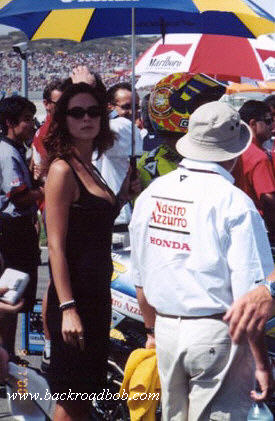